Ennard is one of the most interesting FNAF animatronics that the series has seen. He is not a regular animatronic but an amalgamation of a few. He is one of the scariest characters that the Five Night’s at Freddy’s franchise ever got.

He first appeared in Five Nights at Freddy’s: Sister Location. The game changed the whole direction that the series was going. After the end of the first four games, the rest are now entirely focused on the Afton storyline. Where everything is around them instead of the original five missing children. That’s how we got Ennard. An animatronic that became really important for the series and the lore. 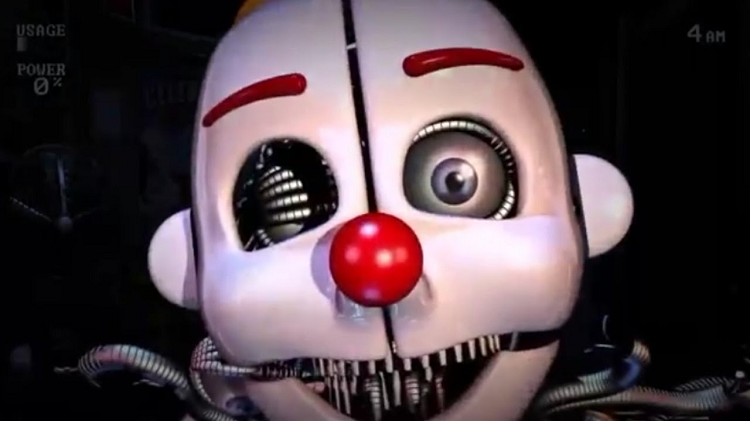 Trip to the Scooping Room

The first time Ennard had appeared was in Five Nights at Freddy’s: Sister Location. That games changed the series forever, and Ennard happened to be a part of that change.

This location is placed underground, where you need an elevator to get to it. When you exit the elevator for the last time, you will enter the Primary Control Module room. You will be welcomed by two dead bodies of ex technicians, who are hanging above the Ballora Gallery and Funtime Auditorium.

You may also notice that the mask that was right on the top of the room two nights ago is gone. You will be faced with the decision to pass through the Funtime Auditorium so you can reach Parts & Service, where deactivated Circus Baby awaits you. Her voice will start instructing you how to remove a specific chip from her body so she can guide you with her voice to the scooping room.

A detail a player might not notice for the first time is that they are not alone in the room with Ballora like Circus Baby says, but with Ennard, who is standing just right behind her. You can see without any difficulty the wires poking out of his entangled body behind Baby, waiting for you to make a mistake.

If you finish everything correctly and send Baby to the Scooping room, he will disappear along with her. But if you fail to do that, you will be jump-scared by Ennard for the first time. That would be a rare occasion where he doesn’t have his clown mask on.

Baby’s voice will still guide you because of the chip you’ve collected. You will then be challenged to go through the Funtime Auditorium again. Still, instead of being empty, it now has Ennard inside. Baby will tell you when you must either start or stop moving. If you don’t listen to her, you will get jump scared by maskless Ennard.

If you successfully reach the Scooping room, you will be greeted by dismantled Funtime animatronics laying on the ground and Circus Baby’s voice. She starts telling the player a sad story about how they can’t leave and want to escape, but they are always put back down there. They also have feelings; they received a fate that no one should ever go through. The animatronics are crying out for help, and you are their final solution.

“The Scooper only hurts for a moment.”

During this dialog, a figure will slowly appear behind the glass window. That is the first time the player sees Ennard in his original shape and form. He activates the Scooper and gradually disappears from sight. Once you get scooped, the player and Ennard will officially share one body.

The player becomes a rotting corpse that will bring the animatronics out of the facility; after what seems like an eternity, they finally found their freedom. In the end, you, the player, helped them escape the underground location. This is how you get the Real Ending. 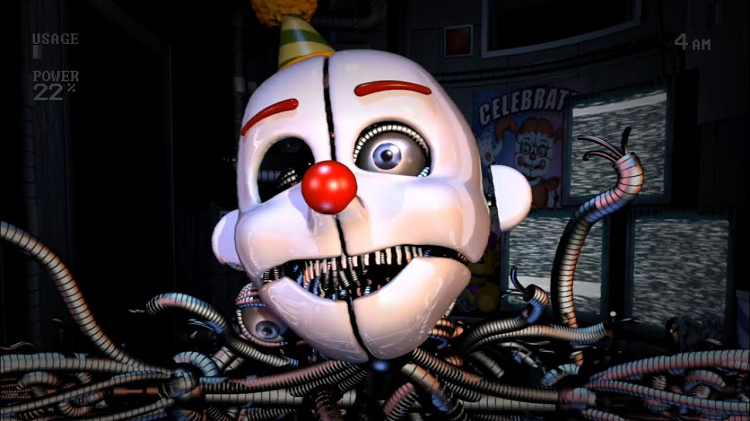 You will get a notably different ending if you decide not to listen to Baby. When she is guiding you through the Funtime Auditorium, instead of going forward like she is instructing you, go right, and you will get to a restricted area called the Private Room.

You will have two doors and one vent opening; it is an office that resembles the ones from the old Five Night’s at Freddy’s games. You must stop Ennard from entering your office, thus jump scaring you. Pay attention to the sound; it’s crucial to know just by that where he is approximately. You will have a one-on-one stand with him for the entire six hours. Constantly check the cameras and sound, good luck.

Once you beat him, the player will find himself in his own home, where you will be watching television. Right beside you, you will see Ennard slowly coming up on you, ready to take revenge for escaping the facility without him.

Ennard appears as a selectable character you can play against in Ultimate Custom Night. He will be located in the vents; he is hardly noticeable by the cameras. You will have to primarily rely on the sound of his endoskeleton moving through the vents.

There are six selectable game modes in Five Night’s at Freddy’s VR: Most Wanted. In the sixth one, Vent Repair, the player has the chance to play Ennard’s level.

You will be at the Circus Baby’s Entertainment and Rental underground location again. You will be obligated to repair the ventilation system so you can reach the Boiler Room. The problem is that the player will be chased by Ennard throughout the entire shift, making the job much more difficult.

If played with VR goggles, it will be an unforgettable experience. The sound design and the atmosphere are just perfect for a VR horror game. You will be jump-scared when you least expect it; play at your own risk. Regardless of FNAF VR, he doesn’t have any counterparts. This is the only version of Ennard that exists in FNAF.

Ennard is an amalgamation of all animatronics from Circus Baby’s Entertainment and Rental. That means that he consists of a few other animatronics that shares the same body and consciousness at the same time. This concept wasn’t present in the FNAF series until this point. He isn’t the only animatronic that is built this way.

He is shaped like a human. His body doesn’t represent any anthropomorphic animal but rather a fully functioning person. He has working arms, legs, torso, neck, head, and fingers that have wires poking out. He has a big red button centered on his chest.

He is utterly terrifying because he resembles a human figure. His mask is the one that was hanging on the top of the Primary Control Module room. A shiny white mask with a clown nose and ears. One part of his face reveals Ballora’s eye and eyelash. His head is decorated with a yellow party hat with green stripes. His face lacks any emotions and facial expressions; it’s always completely still.

In Five Night’s at Freddy’s: Sister Location, the player plays as William’s Afton son, Michael. He was instructed by him to find his lost sister in the underground location, so he can save her.

On the second night, Circus Baby introduces herself to Michael, warning him of the danger ahead of him. Michael hides in a small vent shaft that the previous worker built for his safety. After all of that finally ends, the player will go home.

Circus Baby will continue to guide the player through the rest of the nights, posing as a good guy who wants to save Michael. This wasn’t the true reason why Circus Baby was helping him.

On the last night, Circus Baby leads you to the Scooping Room. By then, the player, playing as Michael, will finally realize that this was all a trap just set for him; Baby organized the entire thing. When the amalgamation known as Ennard is completely formed with the last part being Circus Baby’s body, it’s Michael’s turn to get scooped.

The Ennard is controlled mainly by the Circus Baby. And she is the most conscious animatronic who actively thinks and communicates with the player. Michael will see all other animatronics dismantled, lying down on the floor, and a human-like figure that will appear from behind the window.

That is Michael’s first direct contact with Ennard. Where Baby, through him, starts talking about how Michael is on their way out of the underground facility and how they are going to use him as a vessel to get outside. The conversation doesn’t last that long. The moment he disappears from the window, Michael gets scooped by the scooping machine. Leaving him lying unconscious with blood across the screen.

When you unlock the Custom Night mode, you will have presets and difficulties that you can mix up. If you beat any preset on a Very Hard mode, you will get an exciting cutscene.

There are seven cutscenes in total. Each one will depict Michael’s progression with Ennard inside of him, but his health worsens each time. His body is starting to get the purplish color that his father already has, and he seems more like a walking corpse than a human.

He will get two white dots as eyes as he walks down the neighborhood. Each day, people become more afraid of him, until one day, they hide entirely from him. One day seven comes, his body starts twitching, and he ejects Ennard from his body down into the sewers. You can clearly see how the wired mesh with eyes poking out just slides down there.

He collapses on the ground, presumably dead. Only Ennard’s eyes can be seen in the sewer. While Baby is speaking to Michael, she repeatedly says how he can’t die, thus, completely reviving him.

Michael gets up right away. His body was completely purple, with just a pair of blue pants on, white dotted eyes, and a crooked smile. And just like that, Ennard disappears, and Michael is ready to continue his path of finding his father.

Question: How do you Know Michael Afton is the Main Protagonist?

Answer: It is revealed in the final cutscene that you get when you finish custom night Golden Freddy preset on Very Hard mode. He speaks to his father about how the only thing he needs to do now is to entirely finish him.

Question: Why Didn’t Michael Die in the End?

Answer: When completely finishing the game, the player learns that Michael came to free his sister, Elizabeth. He found her but in a body of a murderous animatronic. In the end, he sets her free, and he is her brother, after all. It wouldn’t have been fair if he didn’t get rewarded for his good deeds.

Question: How to See the Final Secret Cutscene?

Answer: You have to beat the Golden Freddy custom night preset on very hard mode to get this cutscene. There we hear Michael talk to his father about everything that he has gone through.
He tells him how he has found his sister, but not in the way he expected. He tells his father how he shouldn’t be alive, how something is wrong with him. After that, he threatens him how he is going to find him and stop him from continuing his legacy.

Ennard is one of a kind. There are not a lot of animatronics that are like him; he is special because he is the first animatronic that is consists of a few others.

In my opinion, he is one of the scariest characters; he represents the FNAF franchise really well. The player will have a tough time when facing him; he is difficult to overcome. Try playing against him in Five Night at Freddy’s VR: Most Wanted; you can do it now without the VR headset. It’s still a scary experience.