The Five Nights at Freddy’s series was always famous for its art style and the semi-realistic design of the characters. In some games, the animatronics are much cuter, while in others, they are represented as deadly and horrifying as possible.

The animatronics in Five Nights at Freddy’s 4 were not an exception when talking about the scary design. They are one of the best-designed characters in the FNAF series. Also, they are some of the most detailed characters out there.

Nightmare Fredbear is one of the scariest animatronics in the Five Nights at Freddy’s series, and it’s the first time we ever get to see a physical counterpart of Fredbear besides Golden Freddy.

As the name implies, he is a horrifying creature that looks like something you would find in your nightmares. But now, imagine trying to stop him from entering your room when you are alone in the middle of the night because that is even worse than just looking at him.

This article will guide you into everything you need to know about Nightmare Fredbear. It will give you an insight into which games he appears in, how he differs from other animatronics by design, how he was created, and many more questions that will be answered.

It will help you understand his characteristics and possibly show you new interesting information that you didn’t know yet, so let’s begin! 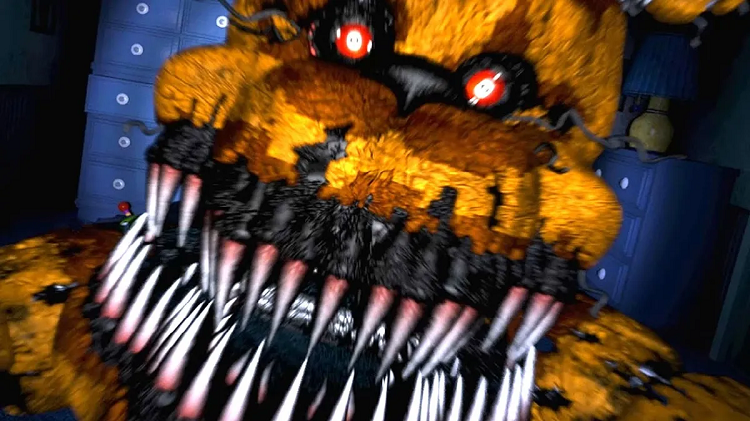 Five Nights at Freddy’s 4 is the game where the Nightmare animatronics were introduced in the series. During the development, there were constantly new teasers appearing on Scott Cawthon’s website, building the hype for the new game back then. Finally, Nightmare Fredbear appeared for the first time on one of them, and the community was amazed by the stunning visuals and design.

Five Nights at Freddy’s 4 is the game where he made his debut appearance. Nightmare Fredbear only appears on the fifth night, where he replaces all active animatronics on prior nights. He mimics the behavior of every present Nightmare animatronics, making him the final challenge that you have to overcome.

Nightmare Fredbear will come from both sides of the hallway, but unlike Nightmare Bonnie and Chica, when you shine the light on him, he will not jumpscare you immediately if he is already in the hallway. He can either be close to the door or far away looking at you from the end of the hall.

You need to close the door quickly and refrain from using the flashlight on him because that is not how you will make him go away. You will know that Nightmare Fredbear is at your door because you can hear him constantly running through the house.

You will also hear his laugh very often, but you must pay close attention to it because when he laughs while he is not moving, Nightmare Fredbear is either right behind you or in your closet, so you have to be constantly on the lookout.

In that case, his severed head will appear on the bed, and you must shine the light on him until he completely disappears, just like the Freddles that were there the night before. And if he appears in your closet, you must shut the door as fast as possible to make him go away, just like you had to make Nightmare Foxy disappear.

His jumpscare is pretty horrifying when you are under all that tension. However, you will recognize it happening when your screen starts to flicker beforehand. 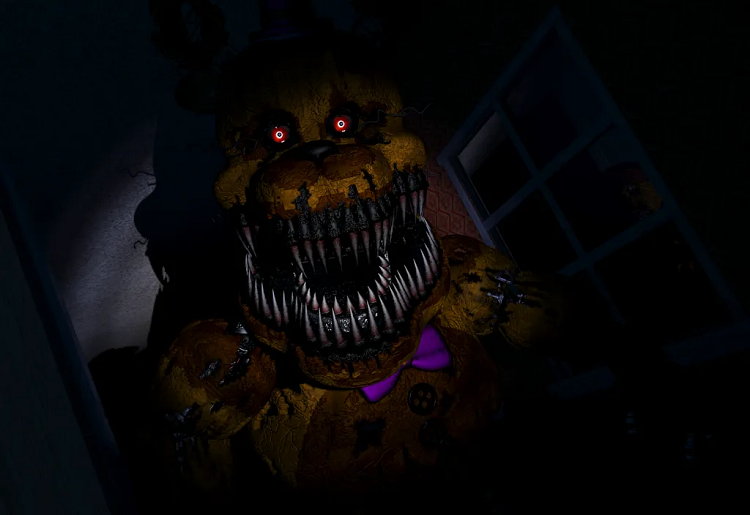 The next time Nightmare Fredbear made his new canon appearance was in Ultimate Custom Night. Before that, we got to see him as a selectable character and minor antagonist in FNAF World, the uncanon kid-friendly version of Five Nights at Freddy’s.

Nightmare Fredbear is a selectable antagonist in Ultimate Custom Night, and he is one of the easier characters to overcome.

Nightmare Fredbear is not visible on the cameras, so you have to rely on your audio to know exactly where he is. When you hear his laugh, check one of the two doors and if you can see his tiny red eyes looking right at you, close and open the door and he will disappear.

Like most of the animatronics in Ultimate Custom Night, Nightmare Fredbear also has a few interesting voice lines which are intended for William Afton, who is trapped in the personal hell that Cassidy – “the one you should not have killed” made for him, including: 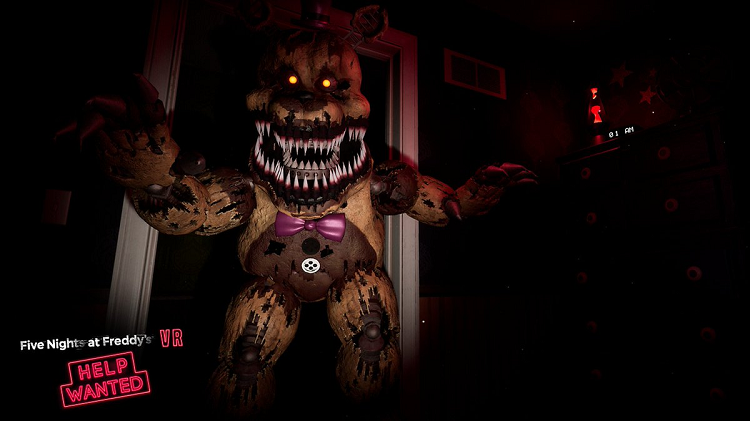 The level may seem simple, but it’s a realistic version of the fifth night from FNAF 4, so you shouldn’t underestimate it because you will have to defend yourself from Nightmare Fredbear for 6 (ingame) hours straight. The mechanics are the same as Five Nights at Freddy’s 4 – check both doors, check your closet, and check the bed behind you.

It’s one of the scariest levels if you are playing with a VR headset, making it difficult since the atmosphere and the setting are terrifying.

He can be seen on one of the arcade games named after him: “Hangry Fredbear.” With an angry facial expression, only his head can be seen, trying to eat a screaming cupcake and a slice of pizza.

Nightmare Fredbear is a giant withered anthropomorphic bear animatronic with a plethora of horrifying details. Most of the space on his head is taken up by his large jaw, where he has two rows of very long and sharp teeth. They have a bloody stain at the bottom, most likely alluding to the fact that he caused the Bite of 1983.

Nightmare Fredbear has a pair of small bright red eyes, which can be seen in the dark in Five Nights at Freddy’s: Help Wanted. His ears are decayed, and he has a specific purple top hat with a black stripe on his head. Then right on his chest, he has a purple bowtie and two different colored buttons underneath, one being black and the other one being white.

One of the most interesting details present on his body is his stomach which has its own pair of teeth. It is probably a lore implication that Funtime animatronics have the same openings that help them capture children inside of them. Maybe it’s indicating that the original Fredbear has the same feature, but who knows.

He has buff arms and large hands with long, sharp, and pointy metallic nails, the scary thing is, that they are blood-stained. His legs are also buff, with big feet missing a few toes. 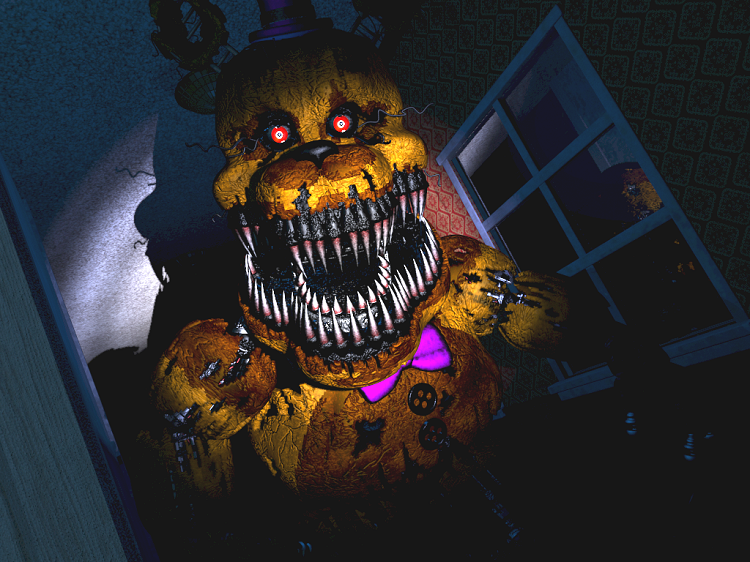 Nightmare Fredbear’s origin was quite a big mystery. Since you are playing as the Crying Child, or Evan Afton, in Five Nights at Freddy’s 4, you are the victim of the Bite of 1983 that the original Fredbear animatronic caused.

Even Afton’s older brother – Michael Afton, and a group of his friends dressed up as animatronics put the Crying Child directly into Fredbear’s jaw. Thinking nothing of it, the spring locks inside Fredbear malfunctioned because of Crying Child’s tears, and then Fredbear crushed him while he was inside.

After that event, he was most likely put immediately in a hospital, where he had reoccurring nightmares of those animatronics for several nights. Nightmare Fredbear is one of the deadliest Nightmare animatroncs because he is the one that killed the Crying Child.

Answer: The Bite of ’83 occurred when the Crying Child was put right into Fredbear’s jaw, then his crying caused the spring locks to malfunction, crushing his head while inside. While the Bite of ’87 happened to one of the previous night guards or employees, whose face got bit off, most likely by Mangle.

Question: Does Nightmare Fredbear Have Any Counterparts?

Answer: No, he doesn’t. The only counterpart that he has is Adventure Nightmare Fredbear from FNAF World – a non-canon FNAF game that isn’t important to the main series. That counterpart never made it out from that game.

Question: How is Nightmare Fredbear Related to Nightmare?

Answer: They are only related by their looks and behavior. They share the same model but with different colors, and Nightmare has the same behavior pattern as Nightmare Fredbear, but he is just a little more aggressive.

Nightmare Fredbear is one of the scarier animatronics in Five Nights at Freddy’s, from his backstory to just his overall design and appearances. He is a scary creature that is luckily just a figment of someone’s imagination. Scott Cawthon went into details when designing him and the rest of Five Nights at Freddy’s 4 animatronics. He did a good job deciding what he was going to look like and in what environment he was going to be.

He is one of the greater animatronics, and I would definitely like to see more of him in the future Five Nights at Freddy’s games, of course, if that’s even possible.