The sixth canon installment of Five Nights at Freddy’s – Freddy Fazbear’s Pizzeria Simulator, features a lot of new animatronics that you have to encounter throughout the game. They are now far more deadly and dangerous than in the past games.

One of those animatronics is called Lefty. He is a new anthropomorphic bear animatronic. Lefty shares the same exact model with the newly implemented Rockstar Freddy.

He is not an ordinary animatronic by any means. He was purposely designed by Henry Emily – one of the co-founders of Freddy Fazbear’s pizzeria. Lefty was made to contain the Marionette who appears in Five Nights at Freddy’s 2. The reasoning for that will be revealed further down in the guide.

There are a lot of things to say about Lefty since he is an important character whose appearance reoccurs in the next FNAF games. He has a special place in the story of Five Nights at Freddy’s. 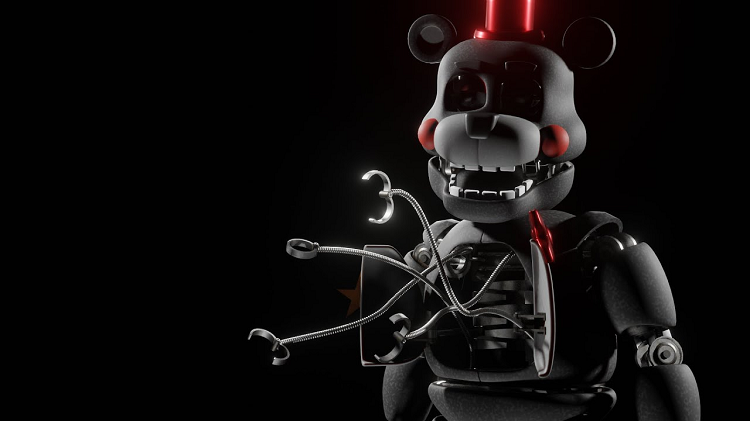 He is available to buy just for $5, which may seem like an incredible deal. His statistics may seem excellent at a first glance with the entertainment value being 9. But the elephant in the room is the Liability Risk of 9. Once you place him on the stage, he will bring the risk of harming a child within the pizzeria.

But regardless, by only buying him, he will start to roam around your pizzeria way before when you get the option to salvage him. Lefty is a danger. You will make your nights only more difficult if you decide to buy him, it’s not worth the benefit he provides.

When you finish the 4th night after already buying him, instead of him, you will be greeted by a wooden sign.

That has a winking smiley face painted on it, with the text: “No one is here (I’m already inside.)”, referencing the fact that you already have him inside of your pizzeria. That is not a good thing since you lost the opportunity to salvage him for $5000. Because of that, I don’t recommend you to buy him at all. 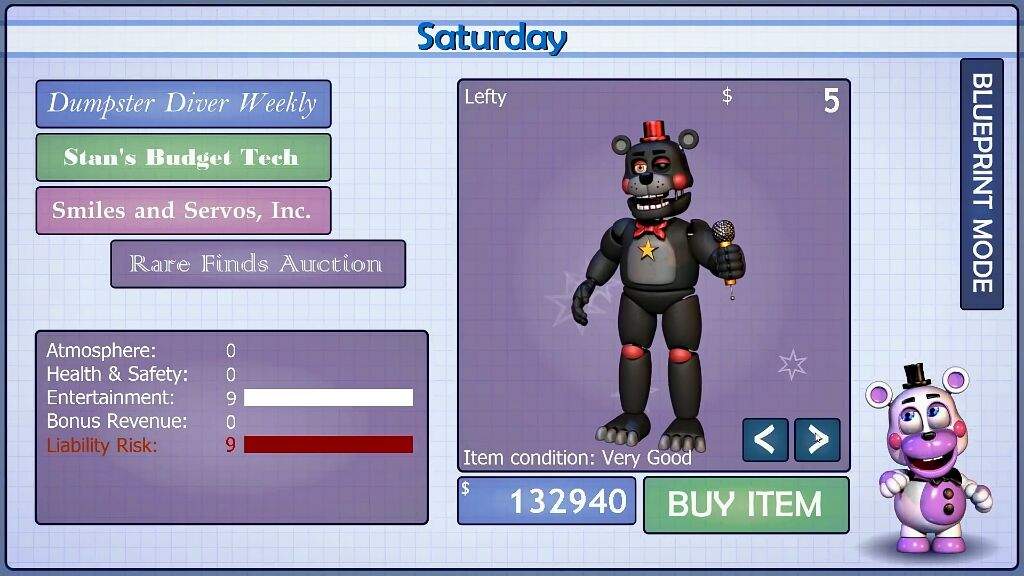 If you didn’t buy Lefty, when you finish the 4th night, a new interview-salvage minigame will be activated. There you will be greeted by Lefty in a lightly dimmed salvage room. He is the last animatronic found in the back alley to be salvaged.

In the best case, you can salvage him for $5000, which will come in handy later in the game. If you decide to salvage him, you will have to deal with him roaming around the pizzeria the next night. You can prevent this by putting him back in the back alley.

In Freddy Fazbear’s Pizzeria Simulator, there are six endings that you can get after completing the game. The one where Lefty appears is the Insanity ending.

To achieve that ending, you will have to purchase Egg Baby (Data Archive) from the Rare Finds Auction for $6000. Once you do that, head to the terminal and turn off your computer. Then locate a button on the down left corner of the monitor, and hold it with your left click.

The computer will turn on, and it will start playing an audio file that Henry Emily – the creator of all animatronics and the founder of the pizzeria, has left. He will start talking about his creations, and the souls of dead children, who he wants to free.

On the monitor, you will see blueprints for Molten Freddy, S.C.U.P, also known as the Scooper, R.A.S.C, an unknown creature that is probably used for playing audio lures in the vents in order to distract the animatronics. And the last blueprints are for L.E.F.T.E, known to the player as Lefty.

Then you discover that Lefty is actually his nickname, while his full name is L.ure E.ncapsulate F.use T.ransport & E.xtract. Lefty’s full name and blueprint confirm the theory that the Marionette is located inside of him, besides not being able to see her directly.

The entire showcase will be interrupted by the narrator. He will tell you how you found something that you shouldn’t have. You will immediately get fired from the job and handed the Insanity certificate. The last scene shows how you are being prepared for brain lobotomy. Declaring you crazy because of all the things that you shouldn’t have seen.

Lefty made the next appearance in Ultimate Custom Night where he is available as a selectable antagonist. By far, he is challenging to deal with in UCN. You will have to constantly monitor camera number 3, in case of a high temperature or noise. Lefty has a few stages of getting up before actually jumpscaring you.

To stop him from attacking you will have to play the global music box, which will drain your power supply. You can’t prevent his jumpscare using the doors. If he manages to kill you, he will soothe you with his voice that sounds like one of a sick child. It’s not recognizable if it’s a boy or a girl speaking.

Here are his following voice lines:

Lefty is announced to make an appearance in Five Night’s at Freddy’s AR: Special Delivery – the exclusive phone augmented reality FNAF game. Few leaks show how his model will look, along with his model’s animations and the complete fighting scene. 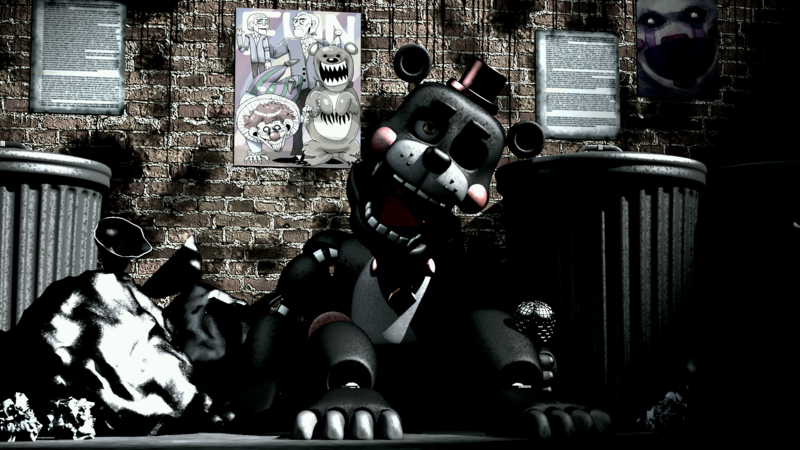 In Freddy Fazbear’s Pizzeria Simulator there is a slight chance of a rare boot screen showing up when you open the game. Four rare boot screens show the newly added animatronics. One of them shows Lefty with an open mouth, sitting in the back alley next to garbage cans. Inside him, we can see bits of the exact same Marionette’s white striped lanky body inside Lefty, captured how it was meant to be.

There are four posters on the wall, two of which may seem like clippings from a newspaper article. The furthest one from Lefty, shows an up-close view of Marionette’s face, most likely linking a connection between Lefty and her. 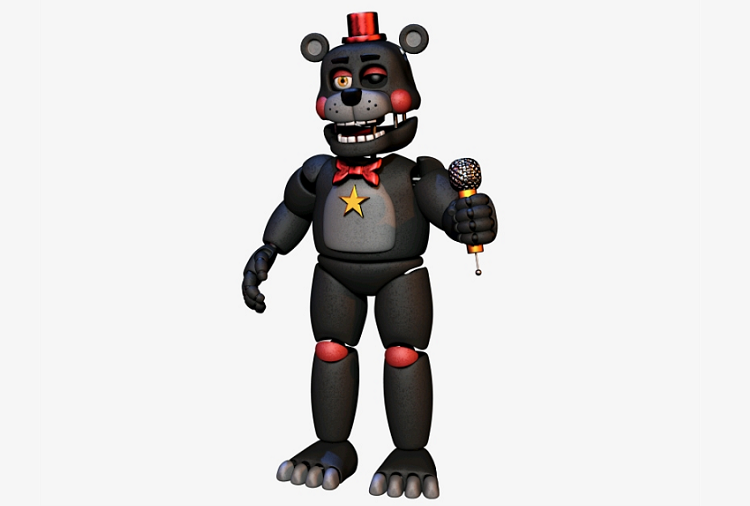 If you were to see Lefty for the first time, you would probably guess he is just a recolor of Rockstar Freddy, as they share the same model and looks. Although, his color palette is different, featuring only shades of black and red. Like Rockstar Freddy, Lefty has a glossy red top hat sitting right on his head. His jaw is wide open and connected by his endoskeleton, he has normal-sized teeth, and his cheeks are bright red.

Lefty’s right eye is orange, while his left eye is missing. He has a bright red bow tie on his chest, and under it is a yellow star that is the symbol of the Rockstar animatronics. In his left hand, he is holding an orange microphone.

The rest of his body is filled with shades of grey and black. And bright red kneecaps.

And his voice in Ultimate Custom Night sounds like something between a boy or a girl dealing with some sort of pain or sickness.

Charlotte Emily and the Puppet

Before becoming animatronic, Charlotte Emily was just a regular girl. She was the daughter of Henry Emily, one of the co-founders of the Freddy Fazbear’s Pizzeria franchise, the original creator of the animatronics and the spring lock system. He would, later, make a debut in the Freddy Fazbear’s Pizzeria Simulator. Charlie didn’t have any troubles growing up, she was her father’s favorite.

Everything was going well until the night, she got locked outside the pizzeria. It was raining outside, and she couldn’t go back in, she was left alone.

Nobody saw her crying on the other side of the window. Even the Security Puppet – the animatronic that would take care of the children within the pizzeria couldn’t help her. Because someone put a box right on top of his music box where he was situated.

Then, a purple car pulled up to Charlotte. Afterward, a man she recognized exited the vehicle – William Afton, the second founder of the Freddy Fazbear’s pizzeria, the man that became a serial killer, murdering multiple children in order to satisfy his sadistic deeds.

Suddenly, he murdered his co-worker’s child with a motive unknown still to this day, and he then drove off with her body with the intent to hide it.

After searching for quite some time, he found her dead body in an alleyway behind a building. Security Puppet got visibly frustrated, even he, as an animatronic, showed emotions that made clear how much in sorrow he was. He kneeled down next to her and fully embraced her.

Dealing with the immersed amount of grief because of a death that could’ve been prevented.  Charlotte’s soul would later possess the exact same Security Puppet who came to save her from an unavoidable death.

Charlotte appeared in the form of Marionnete for the first time in the second installment of Five Nights at Freddy’s, as an enemy to the night guard. Where she was to be found in the Prize Corner area, in the same exact music box where the Security Puppet was located.

Even after this massive tragedy, Henry Emily, Charlotte’s father, didn’t give up on finding and rescuing his daughter. After a few decades, he decided to open a new pizzeria that would act as a trap for the remaining souls of children killed by William Afton. In order to completely free them from their everlasting animatronic fate.

Before the events of Freddy Fazbear’s Pizzeria Simulator, he designed a special animatronic that would lure and capture his daughter – L.E.F.T.E, or just Lefty by the nickname. He wanted to finally find his daughter, so he can put her soul to rest. Lefty successfully captured Marionette, and later she got lured into his pizzeria trap.

Eventually, after some time, everybody got lured into the pizzeria. Henry then set a final message for all the remaining animatronics, explaining to them the situation that they were currently in. The last animatronic that he spoke to was Lefty, his daughter, and he had a special message for her.

“My daughter, if you can hear me, I knew you would return as well. It’s in your nature to protect the innocent. I’m sorry that on that day, the day you were shut out and left to die, no one was there to lift you up in their arms, the way you lifted others into yours.

And then, what became of you, I should have known, you wouldn’t be content to disappear. Not my daughter. I couldn’t save you then.

So, let me save you now. It’s time to rest, for you, and for those you have carried in your arms…”

Question: Does Lefty Have Any Counterparts?

Answer: No, Lefty didn’t make enough appearances to have his own counterpart. In fact, he is a counterpart of the Marionette.

Question: Is Lefty a Boy or a Girl?

Answer: Canonically speaking, Lefty is a girl. Even though you can’t really tell his gender by the voice lines in Ultimate Custom Night, the spirit that is possessing him is a female.

Question: Is Nightmare from Five Night’s at Freddy’s 4 the Nightmare Version of Lefty?

Answer: Even though they are weirdly similar enough by design, gameplay, and position within the game, there is not enough evidence to confirm that theory.

Lefty is an interesting character that made the Marionette make a new appearance in the FNAF franchise. He is important for Freddy Fazbear’s Pizza Simulator ending, to get the true, Completion ending, you must go through the process of salvaging him and later on playing against him.

It would be great if he were to make another appearance in the next FNAF game, but the chances of that happening are near zero. Since his story got to bring to an end.