Scrap Baby stands out because:

She is an enemy you must avoid, and even when she offers help, it does not make her any less dangerous. 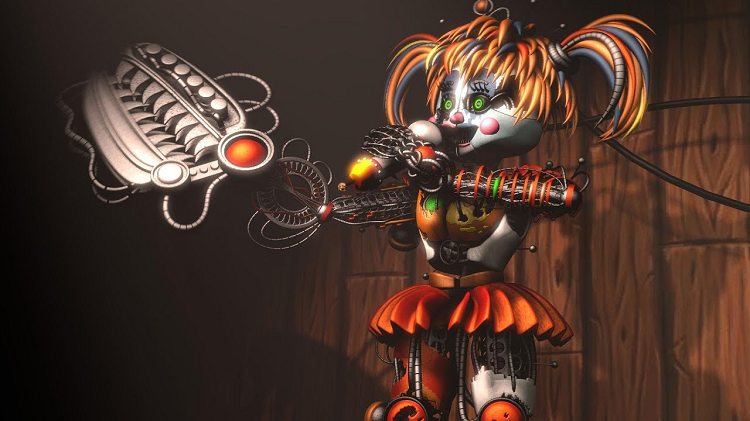 Scrap Baby is a salvaged version of Circus Baby. Unfortunately, she has received significant damage, which is visible. She wears colorful pigtails, a red skirt, and a red-frilled orange top. She has a spiked claw for her left hand, and multiple pins stick out of her skirt, arms, and legs. And she also wears roller skates and a tiara.

Her face is still clownish, with long eyelashes, rosy cheeks, reddish lips, a pale face, and a pink nose. Her eyes have green irises that glow when she attacks you. Scrap Baby’s endoskeleton is full of metal wires and robotic parts. They are arranged to make them look like exposed flesh with sinewy muscles.

And, of course, there are signs of decay everywhere, which is the most significant difference between Scrap Baby and Circus Baby.

Scrap Baby started out as Circus Baby, which William Afton made for Circus Baby’s Pizza World. She took center stage at this diner. Unfortunately, however, the restaurant closed after only a couple of weeks.

The official story was that the closure was due to gas leaks. However, what really happened was Circus Baby had been programmed to kidnap kids. When they were isolated, she would grab them with a claw and pull them inside her.

William Afton’s daughter, Elizabeth, was fascinated with Circus Baby. Though he forbade her from approaching the animatronic, Elizabeth soon found herself alone with it. Circus Baby attacked and, unfortunately, killed her.

However, this was not the end of Elizabeth. Her soul came to possess Circus Baby. After Circus Baby’s Pizza World closed down, all of its animatronics were taken to its sister location, called “Circus Baby’s Entertainment and Rental.”

Baby initially helps out an employee, Michael Afton, to avoid getting killed by the other animatronics at this sister location. After the fourth night, though, she kidnaps Michael and traps him inside another animatronic.

Michael survives, and Baby shows remorse. However, this is a ruse to get them to scoop out her endoskeleton so she can merge it with the other animatronics. The combined animatronic kills Michael, crawls into his skin and escapes the sister location.

However, he soon vomits them out into a sewer.

Elizabeth probably returns to the salvaged Circus Baby, which becomes Scrap Baby because of its terrible condition. Even though she can effortlessly kill you, her goal is just to please her father by continuing his sadistic work.

However, we soon learn that Freddy Fazbear’s Pizza Place was a trap for Scrap Baby and the other haunted animatronics. The Pizzeria burns down, and Elizabeth’s soul becomes free as the animatronics are destroyed. 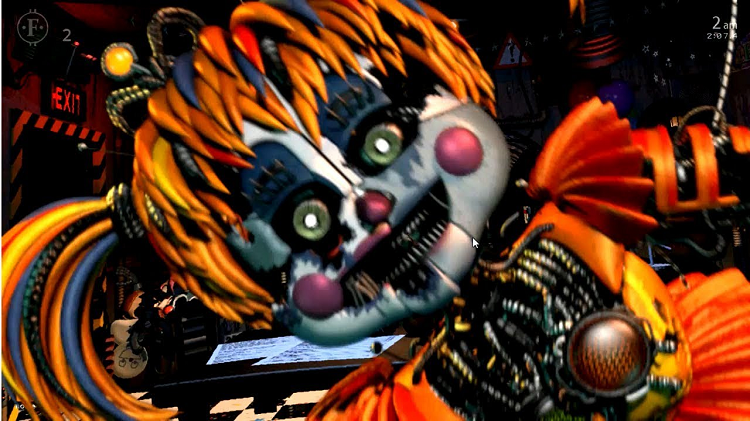 After the opening minigame, you will find yourself in an office with a sheet of paper and a tape recorder. Scrap Baby is across the table from you, and Cassette Guy goes through several audio prompts. Finally, scrap Baby finishes the countdown and moves her eyes to look at you when he starts counting down.

When trying to salvage Scrap Baby, watch out for her eyes. If she looks at you and you can see her eyes, use your taser before looking at the camera for other animatronics. Otherwise, a jump scare is in store for you when you exit the camera.

And during the office stages, she can appear from any vent. Turning off the fan and computer might keep her away for a while, but you will pass out if the rising temperature reaches 120 degrees. When she is inside a vent and getting close, she can say a line when she’s near. You can then turn off the fan or shine a light into the vent and keep facing it until she goes away.

Scrap Baby will first appear across your desk, not functioning. She might attack you that night or not. Depending on the difficulty you set, she might attack you every night. So, being able to predict her moves is essential if you want to survive.

Thankfully, you can do just that. There is a shocking panel next to you on the desk. When Scrap Baby appears, wait until she moves. This means she is about to attack, and that’s your chance. Shock her, and after you look at your camera, she will be gone. She also won’t attack you for the rest of that night.

Be careful with the shock panel, though. Every time you use it, it will use 1% power.

Scrap Baby only makes a cameo in this game. This is through the Scrap PlushBabies, among the other PlushBabies available in the Dark Rooms level. Several PlushBabies appear in this level, and to keep them off you, you have to shine your flashlight on them.

Circus Baby is the initial form of Scrap Baby before she killed Elizabeth Afton. She has clown makeup that consists of bright red cheeks, red lips, a red nose, and a pale face. Her ponytails are held by blue hair bands, and she wears a red top, a short red skirt, and red shoes.

Her stomach is exposed to show a fan, and several pins are sticking out of her arms and legs. Circus Baby first appears in Five Nights at Freddy’s: Sister Location. After dying, you enter a minigame where you play as Circus Baby herself. Your goal is to give cupcakes to every child on the map before time runs out.

If you succeed, Elizabeth Afton shows up and approaches Circus Baby. The animatronic then grabs the girl with a claw from her stomach and pulls her into its torso. Elizabeth screams, and the minigame ends.

This is a skin for Circus Baby released for Valentine’s Day. The main difference between this skin and Circus Baby is that Heartsick Baby is predominantly pink. She also has torn black wings, wields a bow and arrow, has bloody heart-shaped arrows sticking out of her, and the opening in her stomach is also heart-shaped.

This is the first Circus Baby skin released in Special Delivery. Her eyes are red, and a broiler replaces her stomach. She also wields a coal shovel and covers herself entirely in soot.

This is Baby’s plush version and is homicidal in all its forms. Multiple PlushBabies appear in FNAF: Help Wanted, including a gigantic one.

As her name implies, 8-Bit Baby is the 8-bit version of Circus Baby. She first appears in the Sister Location minigame where Circus Baby kills Elizabeth Afton. We can also encounter her in Five Nights at Freddy’s AR: Special Delivery.

Question: Are Scrap Baby and Circus Baby The Same Person?

Answer: Even though they occupy the same animatronic body, they are not the same. Circus Baby was an animatronic who murdered children, while Scrap Baby is the animatronic possessed by Elizabeth Afton.

Answer: In essence, yes. William Afton made Circus Baby Circus Baby’s Pizza World’s mascot. However, her programming made her count children until only one was left. She would then lure the child with ice cream and kill them.

Answer: Scrap Baby and Circus Baby are both voiced by the same person: Heather Masters.

Scrap Baby is an intriguing yet menacing animatronic, and her presence is something to fear. Since games like Freddy Fazbear’s Pizzeria Simulator and Ultimate Custom Night have her close to you, she can feel more intimidating than the other animatronics.

This makes her a welcome challenge. And when you consider her lore (That she is actually being possessed by Elizabeth Afton), Scrap Baby actually becomes one of the most sympathetic animatronics in the franchise.