Marionette, or the Puppet, is one of the most recognizable animatronics in the FNAF series. First appearing in Five Night’s at Freddy’s 2, where you have to wind up her music box so he doesn’t leave it. When he appeared for the first time in the game, it was a hard time figuring out his backstory.

The only information that was available about her at that time was in the minigames that had a chance of occurring after the player’s death, there was nothing more than that. People could only partially guess what happened by all those details that we were left with.

He is an interesting character, he is way different than the other animatronics in the pizzeria. Not only by looks but also by behavior. 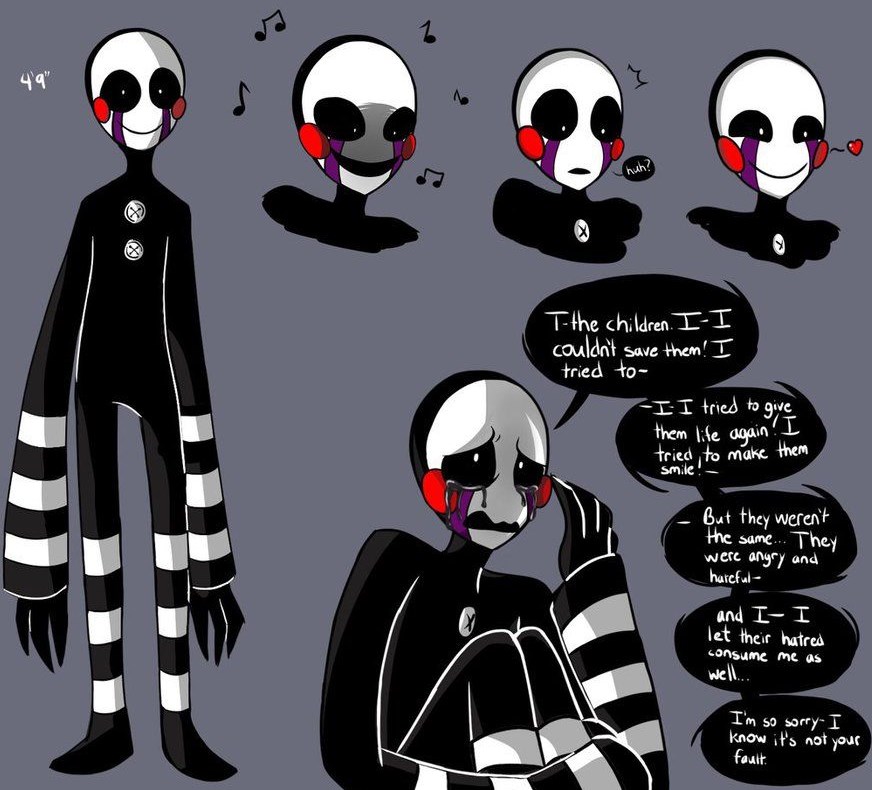 This animatronic in particular has two names that are used when mentioning him – Marionette, and the Puppet. The one that I hear the most being used is the Puppet, it looks much simpler and easier to say and read to the human eye.

In the end, it just depends on the version of the game that you are playing. It doesn’t make a huge difference since both names are officially in use. Everything depends on your liking, you can call it Marionette, or the Puppet, it’s completely up to you.

Marionette first appeared in the second installation of Five Night’s at Freddy’s. He sparked a lot of attention when he appeared, due to all hype that surrounds the games even to this day, a new character is always going to be intriguing to everyone.

Him not looking like any other animatronics was also pretty interesting back then. He was the closest we got to a human figure.

He also appears in death minigames of FNAF 2. Where you either end up following him or playing as him, those minigames were a huge thing back then. Since they were the only thing that you could make lore out of, they were hinting at his backstory which we completely know today.

The second time Marionette appeared was in Five Night’s at Freddy’s 3. Besides him making an appearance as Phantom Puppet, he is the last thing that you see on the cameras before you encounter Phantom Puppet. You will see him in the Hall (CAM 08) standing right at the end of the hall.

He is a playable character in the minigame Happiest Day. Your goal is to deliver a big cake to the table where there is a birthday party.

The ending that you will get depends on if you have correctly completed the previous minigames that were accessible throughout the different nights. If you did, you will get a good ending, but if you haven’t, you are going to get the basic one.

His next appearance took place as Nightmarionne in Five Night’s at Freddy’s 4 Halloween Update, replacing an animatronic called Nightmare. You will have to deal with being alone in an empty house with that lanky creature trying to get in your room.

The Puppet was also featured as a playable character in FNAF World, along with his other counterparts. 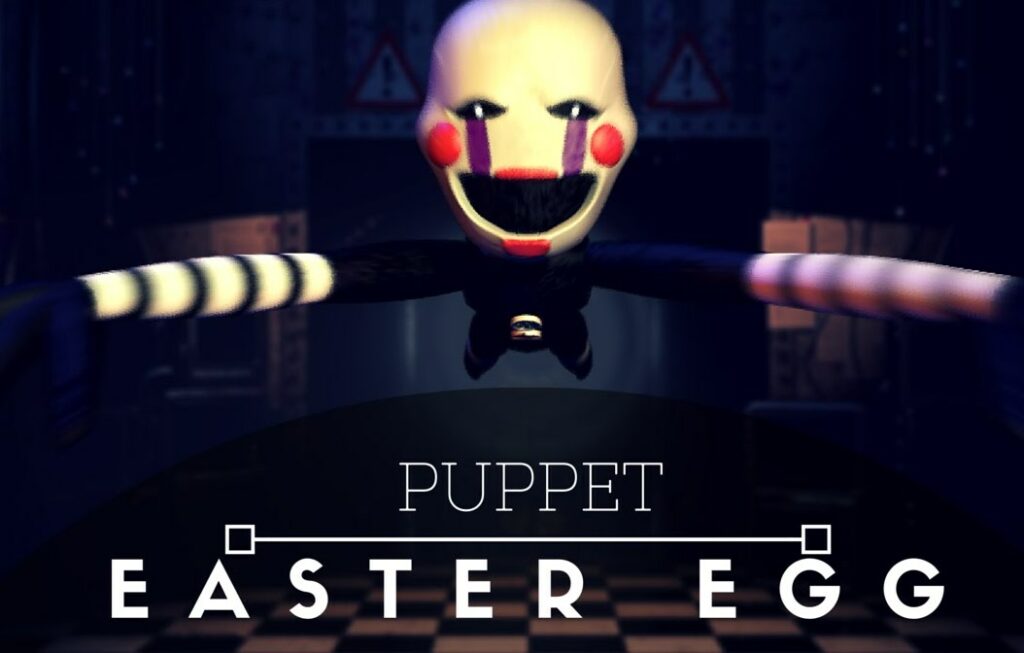 In FNAF 6, he appeared in two different separate forms. Now officially taking the form of the new animatronic, Lefty. And he played a major cameo in a secret minigame.

The minigame is called the Security Puppet’s Minigame. The minigame unravels a very important piece of lore, it recreates a minigame from FNAF 2, but this time from a different perspective. Where a child got locked out outside of a birthday party that it was supposed to go to. Then the Purple Guy came out of a car and he killed the child, after that, we get jumpscared by the Puppet.

This time we got the same minigame but from a different perspective. The puppet was meant to be a security animatronic, which would take care of children. He was like a robot security guard who would habitat in a music box, he would make sure that children are safe by any means.

When you have played the Security Puppet minigame three times, you will notice a child that can’t get into the pizzeria because the door is locked. There is a box on Marionette’s music box, so he can’t do anything to save the child.

The child is at the window, unable to get inside, and then the same thing happens like, in FNAF 2, the child gets killed, disappearing at the same time. The rest of the minigame is based on how he is trying to find the child, eventually succeeding and finding him dead in the back alley. 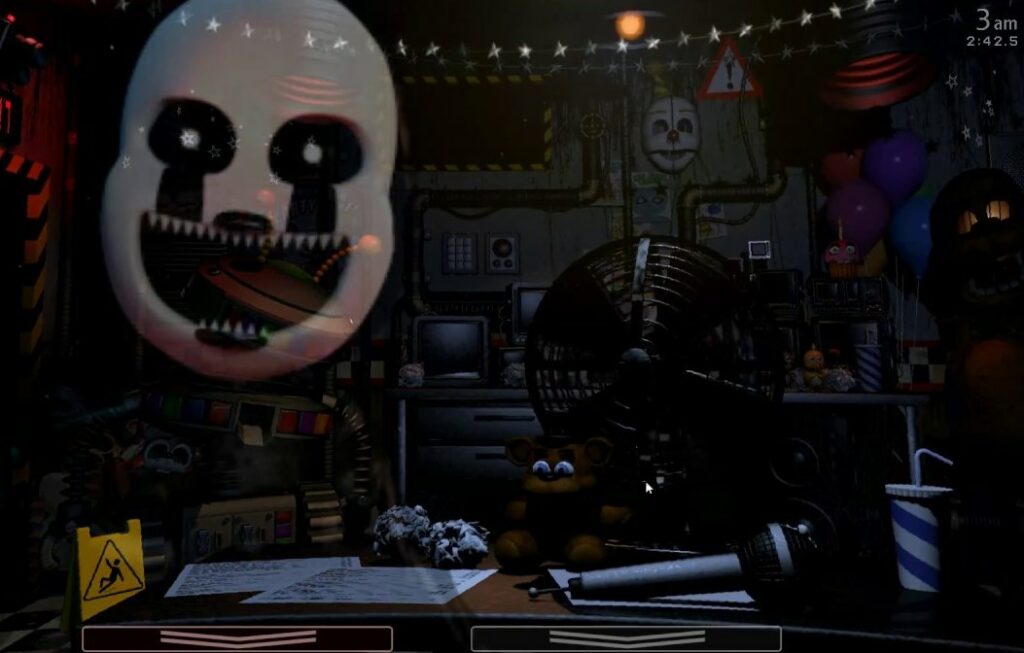 The next game where the Marionette appears is Ultimate Custom Night. He is a selectable character that you can choose to play against. To keep him calm, you will have to wind the music box as you did in the second installment of the game, where he got introduced.

The same case is for games FNAF VR: Help Wanted and FNAF AR: Special Delivery, where he appeared next. The last time he appeared in a FNAF game was in FNAF: Security Breach, where you could’ve seen his mask as part of the animatronic amalgamation known as The Blob.

I didn’t intentionally mention his appearance in Scott’s two troll games, Security Breach: Fury’s Rage, and Freddy in Space 2. They aren’t that important to the series, nor to the player.

The first time that we saw a different version of the Puppet was in the third installment of Five Night’s at Freddy’s. His design and behavior were changed and adapted to the setting of FNAF 3. His body now features dark greenish color, through which you can only see the top of his head, along with the two white dots that he has for his eyes.

Instead of having to constantly wind up his music box, all you have to do now is try to avoid him on the cameras because if you don’t, you will end up with a disturbing close up of his face across your entire screen, along with eerie noise that will go on in the background. Encountering him in most cases would result in a game over for you.

The second time that he got an alternation was in the Halloween update for Five Night’s at Freddy’s 4. He was there featured as a replacement for Nightmare, sharing the same behavior.

His appearance is something that wasn’t seen before, now even taller, with ribs poking out of his torso, instead of his short hands he now has long tentacles, and his mask is utterly more disturbing. You will be stuck alone in a house with him, while he desperately tries to reach your room.

After that, we got to see all Puppet’s previous forms in FNAF World, as in the shape of Adventure animatronics, they are all playable with Nightmarionne being the strongest out of those three.

The last alternation of him that we got is in the form of Lefty. For those who don’t know, Lefty is a special animatronic designed by Henry Emily, the father of the child that possesses the Puppet. He was specially designed so Henry can keep him contained because he was planning to burn him along with other animatronics so their souls can finally be set free. 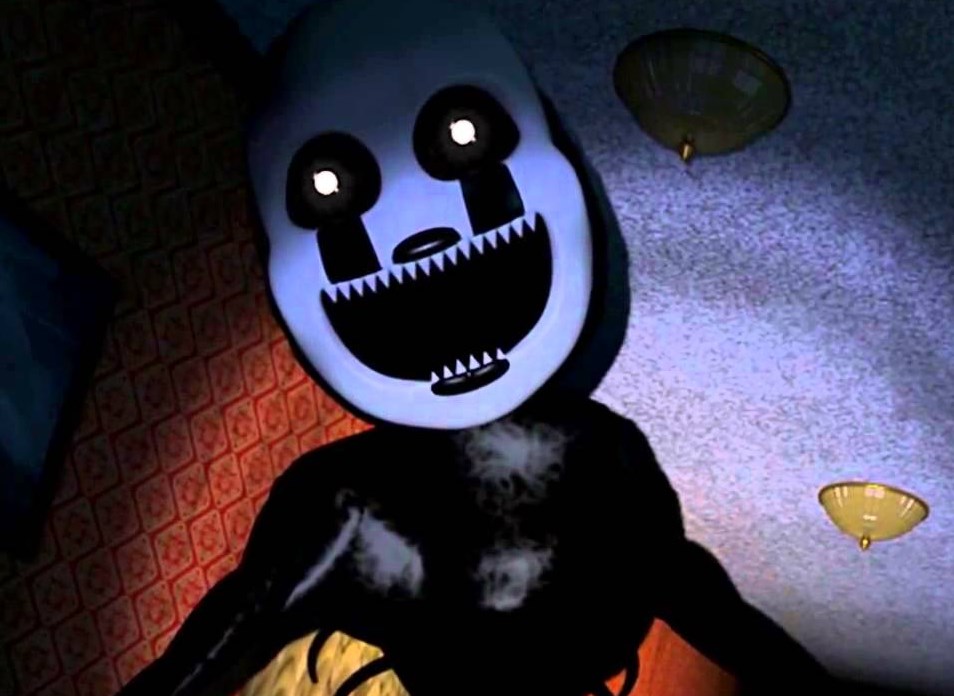 Marionette is a puppet tied to strings in a music box, he has one of the scariest designs that I have ever seen in the whole FNAF series. He is one of the most humanoid characters out there.

His design differs from other animatronics. Marionette is a tall and lanky figure, he has a slim body with three buttons on his chest and long arms and legs that are decorated with white stripes. He doesn’t have functioning hands like other animatronics, he has only three unexplainably long fingers.

The most important feature on him is his mask, it resembles a clown or a mime mask. On his pale white face, he has two dark eyes without pupils and a big smile that takes up a lot of space. He has two purple stripes under his eyes which resemble tears, bright red lipstick, and blushy cheeks.

His gender is complicated. Marionette is possessed by a female child, Charlotte Emily. Which makes things difficult since when she is in the form of the Puppet, he is always mentioned as he/him. In UCN when you get killed by him you will hear a female voice of a little girl speaking to you.

Nonetheless, the Puppet in the form of a puppet is a male character, while the child that possesses him is female.

When you visit him on cameras in FNAF 2, you will hear a creepy yet calming tune. That song is a music box version of an old song called My Grandfather’s Clock, and the music that plays once he is out of the box is a sped-up music box version of a nursery rhyme called Pop Goes the Weasel.

Henry Emily was with William Afton the co-founder of Fazbear Entertainment. He and William worked together on making the Freddy Fazbear franchise come to life, helping him make a good portion of animatronics. They opened their first location which was called Fredbear’s Family Diner, and after a major success, they decided to open another location called Freddy Fazbear’s Pizza.

He had a daughter that was called Charlotte, and she was one of the most valuable things in his entire life.

From that point on, everything started to go downhill.

Charlotte got locked out of the birthday party at Freddy Fazbear’s Pizza. She was standing alone in the rain looking through the window, trying to find the animatronic security puppet that would take care of other children.

The problem was that his music box had another box on top of his, so he was unable to leave in time to lead her down to safety.

When he got out of the box, a purple car parked right beside her. William Afton step out of the car, and once he got closer to Charlotte, he blatantly murdered her. She then disappeared from the window, and the car with William drove off. 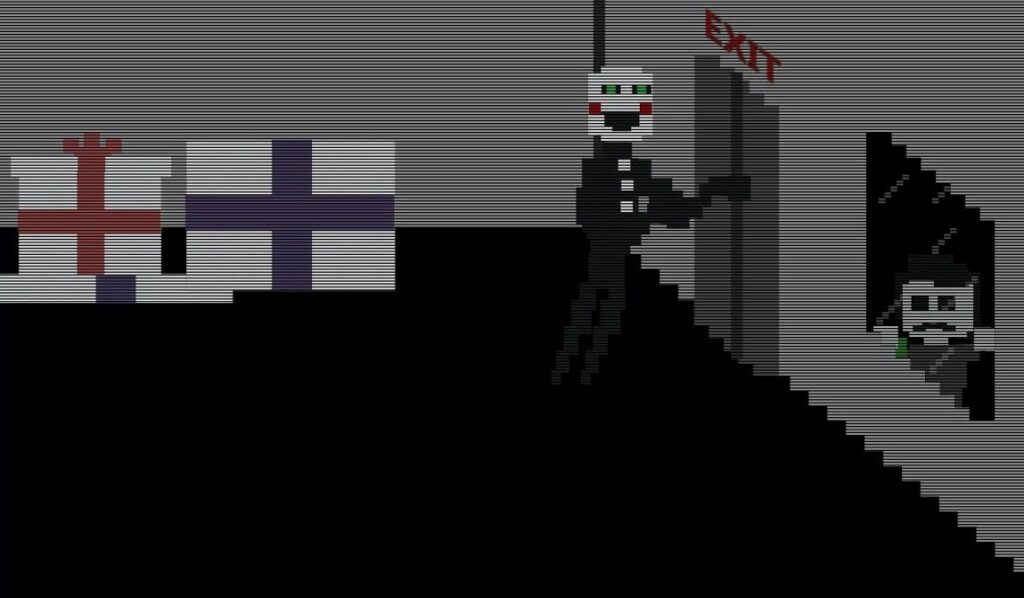 The Security Puppet was devasted, he finally exited the pizzeria and went on to find missing Charlotte. Regardless of the rain that was making him malfunction, he still didn’t give up. After searching her for quite some time, he finds her in an alley, where her dead body was laying down facing the floor.

The puppet was visibly in great grief. He couldn’t prevent a child’s death, putting all fault on just himself. The puppet slowly kneels down, lays next to Charlotte’s body, while hugging her at the same time. Making this one of the most heartbreaking scenes we ever got to see.

After those events took place. Charlotte’s soul possessed the body of that security puppet, and eventually became the Marionette that we know today.

She was the first child that was murdered by William Afton. She was the one that gave the chance, to other five children that got murdered, to possess an animatronic which will grant them a new life.

Question: Is the Nightmarionne canon?

Answer: That’s a debatable question, but officially he is not. Scott himself confirmed that the only animatronic from FNAF 4 Halloween update is Nightmare Balloon Boy.

Question: Are Charlie and Charlotte the same person?

Answer: Yes, they are. Charlie is just a nickname for Charlotte.

Answer: Despite trying to kill the night guard, he gave new life to the children that got killed by William Afton.