William Afton is the occurring main villain in all Five Night’s At Freddy’s games. There is a famous line that he always throws out there: “I always come back,” and he isn’t lying at all. He is constantly coming back from the dead. No matter the form he takes, he is present in all FNAF games.

There are four other variations of William Afton. They gradually change throughout the franchise. They are Purple Guy, Springtrap, Scraptrap, Glitchtrap, and Burntrap.

If we take a look at all FNAF games, then you’ll find out that he died about three times. He is continuously getting resurrected by the spirit of a particular child that he murdered; it is currently claimed that it is one of the spirits that possess Golden Freddy, Cassidy—labeled in the Ultimate Custom Night as “the one you shouldn’t have killed.”

By doing that, Cassidy is making William constantly go through neverending suffering that he can’t escape, that being the reason why he can avoid every situation that would kill a normal person. He is still alive, but not in his original form. He is even present in the new game that came out in late 2021, Five Night’s At Freddy’s: Security Breach.

Without William Afton, the whole FNAF franchise would be over a long time ago. He is the main antagonist that keeps everything going on. The entire storyline is centered on all those children that he killed. 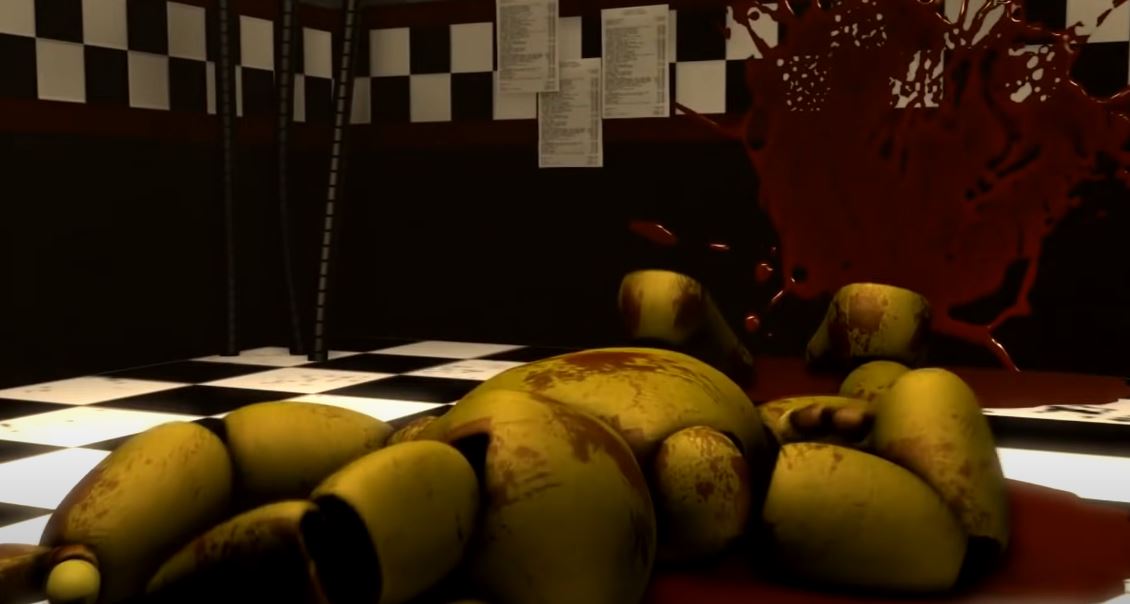 This was way back when he was only known as the Purple Guy. The first and only time we got the chance to see this happen was in Five Night’s At Freddy’s 3, the game that the majority of FNAF players don’t like. Nevertheless, the game itself is very important for lore.

His death is shown in the final FNAF 3 minigame. Before it, you should’ve finished all the other four minigames. They all happen one by one after beating a night. In those minigames, you play as one of the four main animatronics, Freddy, Bonnie, Chica, or Foxy (you will control a different animatronic each time).

You have to reach the very end of the abandoned Freddy Fazbear pizzeria. And once you reach it, the Purple Guy will come out of a room to tear you into pieces.

Then in the final minigame, you play as a fifth soul of a child that has been murdered, presumably Cassidy, the Golden Freddy’s spirit. When you reach the forbidden area where he was hiding for the whole time, you will see four more souls that have cornered him in the room with a spring-lock suit lying down on the ground.

He will helplessly run around the room looking for a way out. Once you corner him, he will put on the Spring Bonnie suit. The suit will sadly for him get activated while he is inside. That happened because of the water dripping down from the ceiling (that is because spring locks automatically activate when they are exposed to something wet).

The children will slowly fade away from the room. You will see him being tortured by his own creation with which he killed all those five children. He will then be left alone while the spring locks crush his entire body; it was now completely replaced with an endoskeleton. Hence that’s how he will die a painful and slow death that will make him unable to leave that suit for the rest of his life.

Burned Alive for the First Time

William Afton’s death before the player’s arrival to the Fazbear Fright’s was very well written for an indie game that was made by one guy. It was a morbid event that no one could ever survive in real life. That is all because of a spirit that was dedicated to torturing him for the whole FNAF series.

Sadly, William will experience the same fate later in the series.

In Five Night’s At Freddy’s 3, there is a sixth night, which to unlock, you will have to beat all nights prior. It is very difficult to complete it; believe me, I really struggled there, but once you manage to do it, you will get a particularly interesting ending.

An image of a page from a newspaper article will appear. It’s written there how the Fazbear Fright’s location was burned down. For those who don’t know, that’s the name of the location where the player is working in FNAF 3. The newspaper says that it was most likely because of the faulty wiring but that it could also be foul play.

All remaining pieces of animatronics that survived the fire were able to be salvaged, and they were afterward sold at a public auction. Instead of this being the end, the story of Springtrap has just begun. Cassidy stuck with William so she could torment him for the rest of his life. This was just the beginning of the rabbit hole that is the FNAF franchise.

Springtrap managed to survive the fire that occurred at the Fazbear Fright’s. He doesn’t look similar near close as he did before. His appearance was drastically changed, making a lot of players not really fond of the new design. It would’ve been unrealistic if his look just stayed the same even though he got burned down together with an entire building.

After these events, a lot of new questions and theories started to appear. Like why did a fire happen all of a sudden, and who could’ve caused it? There is a claim that most of the people stand by; that is the theory that the person who was working at Fazbear Fright’s was actually his son Michael Afton.

His son vowed to find his father after FNAF: Sister Location, and he already tried doing that in a game that takes place after the events of FNAF 3, the sixth canon installment. The theory says that Michael intentionally burned the entire place down to finally end his father’s life. That way, he can set free the souls of children that William Afton has murdered. He wanted to destroy his father’s evil work.

Scott Cawthon, the creator of FNAF, has secretly teased Springtrap’s return in that exact same newspaper. If you enhance the brightness of an inserted image of the Freddy figurine, you will see how Springtrap is still alive, hiding in the dark, looking straight at the camera, which gives the player the knowledge that he is actually going to come back once more to get his redemption.

Burned Alive for the Second Time 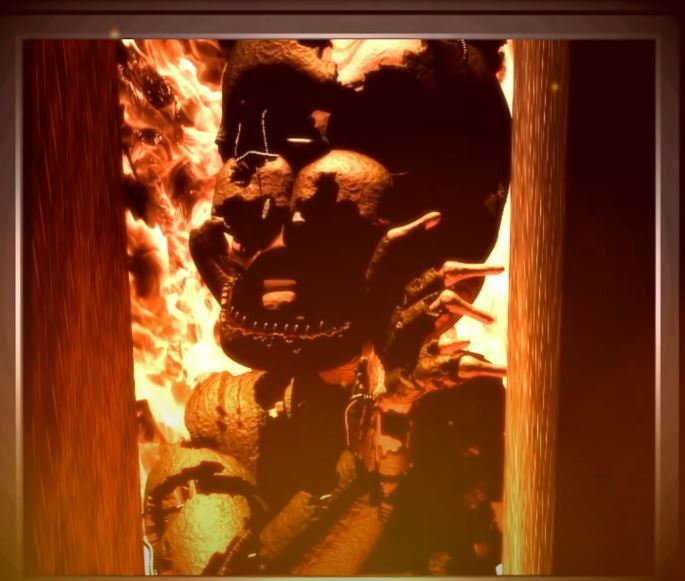 This death takes place at Freddy Fazbear’s Pizza Place, Freddy Fazbear’s Pizzeria Simulator location. FNAF 6 surprised many; it was an interesting spin in the series with new mechanics. From the surface, it looks like a friendly pizzeria tycoon, but it’s another game where you have to hide from the animatronics who are hunting you throughout the whole night, but this time they are even scarier than before.

This game’s ending is the best one we ever got to see so far. No one in the FNAF community has anything bad to say about it; a lot of people think that this should’ve been the final canon FNAF game.

William Afton is now in the form of Scraptrap. After he was caught in a fire that occurred at the FNAF 3 location, the player will encounter him for the first time after finishing the second night. His design has drastically changed. You can now clearly see how his organs are entangled to the endoskeleton inside of his suit.

Once the player has salvaged all remaining animatronics that was found in the back alley, and when you log off your computer for the last time, Scrap Baby will start speaking with you. She is an animatronic that eventually got kicked out of Ennard, and she currently has the soul of William Afton’s daughter Elizabeth, who got accidentally scooped by her.

She will start telling you how this was all a trap designed especially for the player; she thinks that her father was the one telling her what to do, but she was in the wrong. She will be interrupted by an unfamiliar male voice that doesn’t sound near like her father’s.

That is a voice of a man who was the co-founder of the Freddy Fazbear restaurants, Henry Emily. He is William Afton’s old friend and co-worker. They built together with all those animatronics and restaurants. After the missing children incident and after William killed his daughter, who eventually became The Puppet, he completely disappeared from the public eye, and the company even had trouble tracking him down.

He is now back but with a different intention. Henry is now seeking to completely destroy William Afton’s legacy that he left.

During that incredible speech, all animatronics are getting incinerated one by one. So that way, their souls can get freed from the animatronic body. When the scene of Scraptrap burning is shown, Henry directly tells his old partner: “For one of you, the darkest pit of hell has opened to swallow you whole, so don’t keep the devil waiting, old friend,” with those lines ending the sixth FNAF game

Answer: He did, but not in the form of Scraptrap. He will appear throughout the next games through Glitchtrap and Burntrap.

Question: When do events from FNAF 6 occur?

Answer: Freddy Fazbear’s Pizzeria Simulator is a chronological sequel to the third installment. It happens in 2023 or years after the Fazbear Fright’s fire.

Question: Who do we play as in FNAF 6?

Answer: We are yet again playing as Michael Afton. But instead of setting the place on fire himself, he is receiving the same faith as his father.