The examples I’m thinking of here are Walmart and Target. Merchandise is one of the biggest income sources for the franchise, which I think was very well set up. Every FNAF game got its series of collectible plushies. Each plushie represents a certain animatronic from the game.

The particular plushies I’m covering today are from Five Nights at Freddy’s: Security Breach, which came out earlier this year. The fandom quickly fell in love with the new characters introduced to the franchise. But sadly, the game itself is not as good as the set expectations.

I played it immediately when it came out, and personally, it felt more like a walking simulator than a horror game. It got an incredible amount of negative backlash because it didn’t meet the expectations of the hype train. However, although the game wasn’t a big success, the characters that have come out of it are something the community adores.

So today, I’m going to cover the plushies of the new Five Nights at Freddy’s: Security Breach animatronics. I’m going to look to see if they met the expectations, unlike Security Breach. I will list my opinion and all of their pros and cons in this article guide, which you can easily navigate through.

One of the plushies that have caught the most of my attention is Glamrock Freddy. In my opinion, it is the one that stands out the most in this collection. Even though the Glamrock Freddy plush has some flaws and inconsistencies with Freddy from the game, he is the best out of all FNAF: Security Breach plushies.

My favorite thing about him is his vibrant color palette perfectly portrays the original Glamrock Freddy from the game. I also like his top hat, which is a unique attachment to his plush. I can’t wait to place him in my collection with other Freddy Fazbear plushies because he will fit in perfectly with all his other counterparts.

As a Five Nights at Freddy’s plushie collector, I think it’s important to have an insight into a product you buy because it often doesn’t have to meet your expectations. This article is the perfect place to find everything you should know about Security Breach plushies, and whether you should buy them or not.

The Five Nights at Freddy’s series has released dozens of quality plushies made from cotton – perpetuating the exact texture of plush.  I think this is one of the most important factors when deciding which plush to buy because I personally don’t like vinyl because it isn’t soft enough.

A plushie should be made out of a soft material by default. Funko is the prominent manufacturer and distributor of FNAF plushies. They are the first company to release a series of FNAF plushies whenever a new game comes out. But even though they are a large company, they make mistakes too.

So you should always be cautious whenever buying anything, regardless of the brand and store. I wrote this review to make you aware of these plushies’ ups and downsides, so you can know whether you want to buy them. It’s important to have an insight into a product you are buying because you don’t want to end up with something you will regret later.

I’m going to review mainly the official Funko FNAF plushies. In most cases, other bootleg manufacturers are not even worth checking out.

They are almost 100% consistently low in quality but cost the same amount as Funko. There are only two plushies on this list that aren’t made by Funko, but they are still chosen with precaution. You can always buy a plushie from one of those unknown distributors, but you’ll, in most cases, end up with a very low-quality plush.

Similarities to the Game

In my opinion, it doesn’t have to completely match all details, as there are limitations because it’s impossible to entirely replicate a video game character. And I think you should always leave some place for artistic expression unless it goes over the important details.

Attention to the Material

The quality of the plush’s material is a really important factor when deciding whenever you want to buy one because you don’t want to order something you can find at your local fair or dollar store.

Nevertheless, that’s the best way for you to find out if the quality and the material are worth it. It’s essential for a plush to be soft and have a plush texture. Natural materials like cotton are highly appreciable. So you should always be out on the look for that fact when ordering. 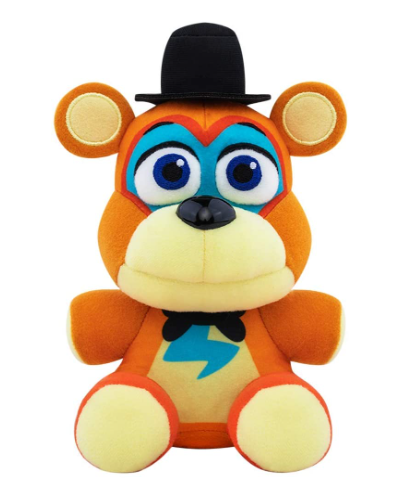 I don’t think this official Funko plushie of Glamrock Freddy is much different from a bootleg version. It’s like the ones you can find on Amazon, but it’s still the best one in this collection. Many people say over social media that he looks like he has been stung by a couple of bees, which is quite noticeable when you look at him. I don’t like how his face looks bloated.

Also, when you compare him to the original Glamrock Freddy from the game, his jaw looks much softer, and he is missing his light blue face paint. Other important details are also missing, like shoulder pads, which I think they could’ve added without a problem.

He is made out of vinyl which isn’t the best material for a plushie. I think cotton is much better as the plushie would be softer and cuddlier. He is a perfect toy for all ages, as he’s cute and small. 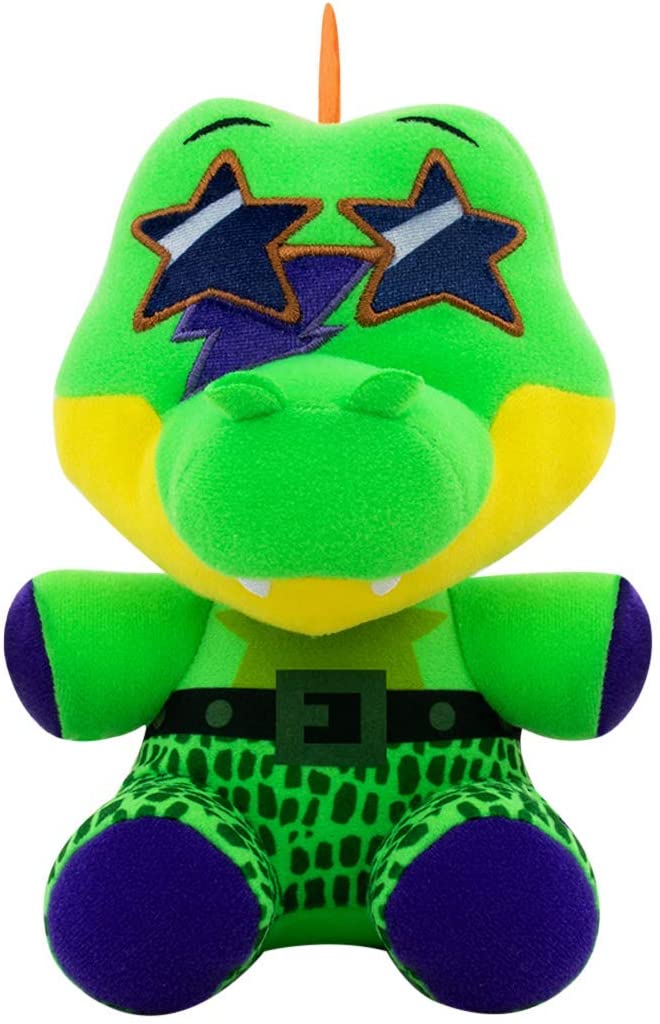 Also, his mohawk is disappointing as it is way thinner than it should be. Overall, he is cute regardless of everything he is missing. I can’t imagine how satisfying it is to finally have him in your Security Breach plush collection, but I’m not the biggest Monty fan.

He isn’t something I would buy as he is also made of vinyl. I don’t like that Funko didn’t use cotton this time, as it did for the previous plushies.

By far, the plushie of Roxy is one of the worst, if not the worst, in this entire collection. I think it’s sad to see the quality of the Funko plush downgrade like that.  The inconsistencies of the color palette are major within her, as she has three different shades of purple for her skin.

And details like the face paint weren’t included. So even though it’s the same case with Glamrock Freddy, her face paint is more important, making this a greater loss. It’s not the most visually pleasing plushie, and it isn’t that soft as it’s also made out of vinyl.

But if you love Roxy as a character, it’s still a great pick. So don’t hesitate to buy it if it will make you happy in the end. It can be a nice addition to your collection.

After Glamrock Freddy, I think Glamrock Chica is the second best-looking Security Breach plush. She is the one that I would be genuinely happy spending my money on. I like that there aren’t any significant details missing like on the rest of the plushies.

Everything is exactly like in the game, and they have put all the essential details. Her appearance stays canon to her in FNAF: Security Breach. She has an adorable face that doesn’t look bloated or derpy this time. It’s a great pick if you collect Chica plushies.

Overall, I would happily have her in my collection one day. The only fact I find to be a bit disappointing is that she is made out of vinyl like the rest of the plushies. But if you can come over that fact, you shouldn’t hesitate to buy her.

Vanny’s plushie, on the other hand, is not as disappointing as the majority of this collection. You could say that she looks average, but I think she is closer to a bootleg. She has a derp face expression that kills the entire crazy murderer vibe she has in the game, but it makes her look gentle and cute.

Which I don’t think is that bad. She isn’t missing any major details, but I think the people designing her could’ve done her overall look and colors better. Vanny is also made out of vinyl. I think she looks like something you would get at a fair or something you can win from the claw machine.

Sun and Moon’s plushies are also one of my favorites in this collection. Surprisingly, they aren’t officially made by Funko, as these are the bootleg versions. I like that they didn’t miss out on any important details. They perfectly portrayed how they look and act in the game.

So it’s probably better that Funko didn’t participate in creating them. This isn’t a perfect product, though, as it has its flaws, for example, the material which is also cheap. But I would still consider buying both as they are pretty unique additions to the collection.

Funko is known for releasing rare versions of Five Nights at Freddy’s plushies called the Blacklights. After the official Security Breach plushie collection launch, Funko has received a plethora of negative backlash regarding the quality of their new plushies.

They took that as a perfect opportunity to release an exclusive series that would not have any problems quality-wise that the prior plushies had. And thankfully, the original Funko standard was met this time, with the quality being significantly improved.

The plushies part of this collection are Glamrock Freddy, Glamrock Chica, Monty, and Roxy. I would love to own at least one of these, but that is not as easy as it may sound. Blacklights are collector’s items that were available only in certain locations for a limited amount of time.

Because of that, they became really expensive. Nonetheless, it’s a great gift for a Five Nights at Freddy’s fanatic. They are better quality, as they don’t seem like something you would get at a claw machine. But sadly, the rest of the regular Security Breach collection plushies has that problem.

Question: Where Can I Buy All of these Plushies?

Answer: These plushies are always available on Amazon and Walmart for the average price of $17,99. Check carefully when deciding which one to buy because there are high chances that you accidentally buy a bootleg version.

Question: Where Can I Find the Blacklight Exclusives?

Answer: They were available for quite some time on Hot Topic. You can try to find them on sites like eBay. However, you will have a more challenging time finding them since they are meant to be collector items.

Question: But I don’t See Anything Wrong with these Plushies?

Answer: That is okay. Everyone is subjected to their own opinion, which is how it should be. If you like these plushies, that’s a good thing for you. However, don’t let others lead you to believe something that you disagree with in the first place.