Spring Bonnie is the earliest version of Bonnie. He used to work at Freddy Fazbear’s Pizza alongside the infamous Freddy. We first see Spring Bonnie in Five Nights at Freddy’s 3.

Spring Bonnie stands out because:

Since Spring Bonnie is an early version of Bonnie, it should not surprise that they look similar. They both have two black buttons and a purple bowtie.

However, the similarities end there. According to Five Nights at Freddy’s: The Ultimate Guide, Spring Bonnie also has yellow eyes. His inner ears, stomach, and muzzle are a lighter yellow, while the rest of him is a darker shade. This contrasts with Bonnie, who is mainly purple in color.

However, he is not among the main animatronics you have to survive or evade in most of these games. Instead, you mainly see him in minigames and find references to him in the game world (like posters or collectibles).

Read on to find out where Spring Bonnie appears in the games mentioned above and how to find him. 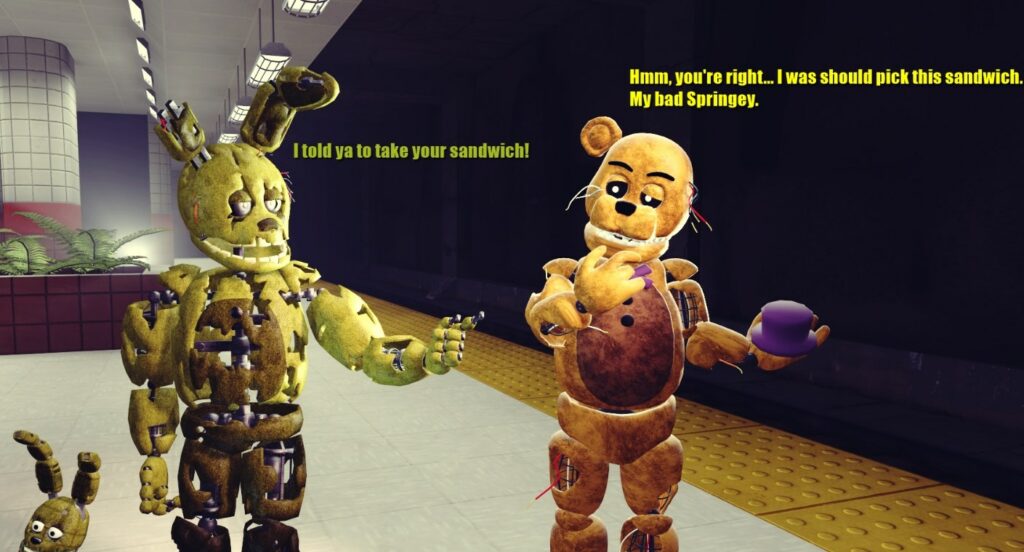 As one of the first animatronic suits, Spring Bonnie performed next to Fredbear in 1983. In fact, he shared the stage with Freddy when the infamous Bite of ’83 occurred (which we see in FNAF 4).

During that incident, William Afton’s son, Chris Afton (or the Crying Child), has a bad time during his birthday party at Freddy’s. Chris’s older brother and friends bully him and eventually force his head into Fredbear’s mouth. However, the animatronic’s spring lock malfunctions, and he bites down, crushing the boy’s skull.

Naturally, the diner closed after this incident.

William became depressed, and a few years later, he opened a new pizzeria where he went on a killing spree while wearing a Spring Bonnie suit. The suit was unique because it was among the earliest with a spring locking mechanism that enabled someone to wear it. However, it could also operate by itself.

William hid the bodies in the other animatronic suits, and the children’s souls would eventually possess them. William soon became obsessed with immortality, and he wanted to do it by killing as many kids as he could. So he built Circus Baby’s Pizza World to facilitate this, where the headlining Circus Baby would kidnap kids for him.

However, his daughter was killed by the Circus Baby animatronic. Grief-stricken, William destroyed the animatronics that contained the murdered children’s souls. Their spirits, however, went after him. He hid inside an old Spring Bonnie suit, but it malfunctioned and impaled him from the inside. However, he did not die. Instead, he lived on in the suit and became Springtrap. 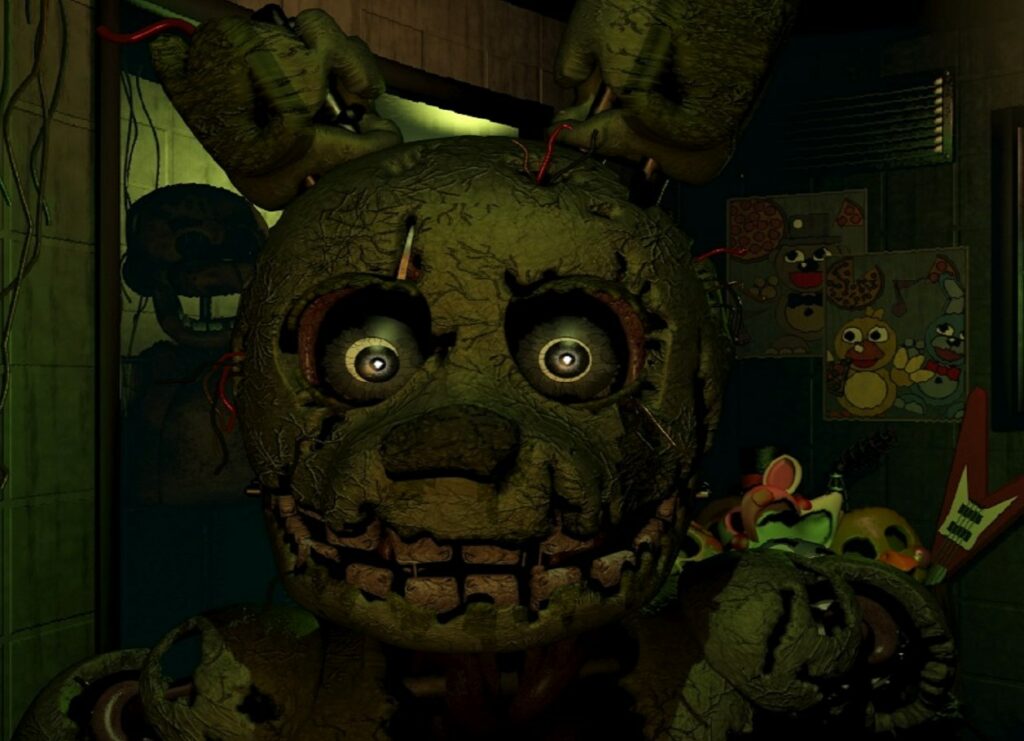 While Springtrap is the main antagonist in this game, you can see Spring Bonnie during the Stage01 minigame. To access the minigame, you have to survive until Night 4. After that, you will see 9 clickable wall tiles inside the Office. You can find them between the trashcan and the box containing animatronic masks.

Here is where things get tricky: you will have to click the tiles in a specific way to trigger the minigame. For example, if you assume the tiles form a dial pad, then click the tiles that would create this sequence in a phone: 3, 9, 5, 2, 4, 8.

This will take you into the minigame where we see Freddy and Spring Bonnie on a raised platform, with 3 children below them.

As you play the game, you can also see the Spring Bonnie poster replacing the ones featuring Freddy. However, they only show up as hallucinations, and you can only see them through CAM 10 and CAM 02. Phone Guy also mentions Spring Bonnie during his phone call. During Night 5, he says that the Spring Bonnie animatronic has moved and warns against wearing it.

In this game, you can also see Spring Bonnie during the minigame. The minigames in question are the End-of-Night minigames, which occur at the end of each night. We can see someone wearing a Spring Bonnie suit (which I assume is William Afton). That happens on Night 2.

On Night 3, the Crying Child meets a girl with a plush toy. The child asks him where his toy is and reveals that she has a Spring Bonnie toy. However, her dad warned her to be careful with it, or she would pinch her finger. On Night 4, we can see a Spring Bonnie head on the upper shelf of a spare parts room. And on Night 5, when the infamous Bite of 83 occurs, a Spring Bonnie animatronic is singing on stage with Fredbear. 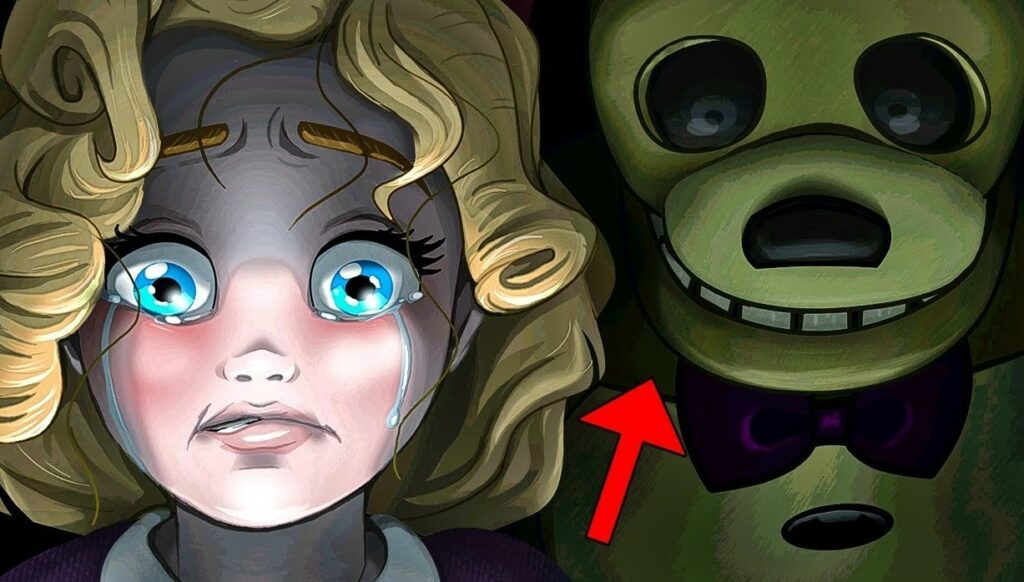 In Freddy Fazbear’s Pizzeria Simulator, you can see Spring Bonnie in a minigame. The Fruity Maze Arcade minigame, as it’s called, has secret gameplay. And you can access it by collecting all the fruits both the first and second time.

After this, the dead dogs will become mutilated. After that, the music will slow down considerably. The girl will leave a trail of blood wherever she goes, and coffins and flowers will replace the other fruits.

Here, you will see several Spring Bonnie figures immune to the player. You will also see William Afton inside a Spring Bonnie suit. He shows up behind Susie, who now looks mournful. And when the game ends, Afton convinces the girl to go with him.

In Ultimate Custom Night, Spring Bonnie only appears in a poster. You can find the poster in the Right Hall.

Spring Bonnie was initially meant to appear in Help Wanted. However, it would show up in its animatronic form instead of as a minigame. This would be the first time in a FNAF game. However, the design changed into a regular costume that eventually became Glitchtrap.

You won’t see Spring Bonnie in a minigame here. Instead, the animatronic only appears on collectible posters. You can find the posters in various locations within Freddy Fazbear’s Mega Pizzaplex.

Withered Spring Bonnie is an animatronic we see in Final Nights. He looks like FNAF 3’s Springtrap, only without William Afton’s corpse inside him. This animatronic has seen better days like the “withered” part of his name suggests. His suit has numerous rips and tears, and most of his right ear is missing. He also doesn’t seem to have eyes.

We only see Withered Spring Bonnie in the game’s epilogue. Here, you should try avoiding him. And if you see him, do not turn your back on him. When you turn your back, he will move quite fast and often in your direction. 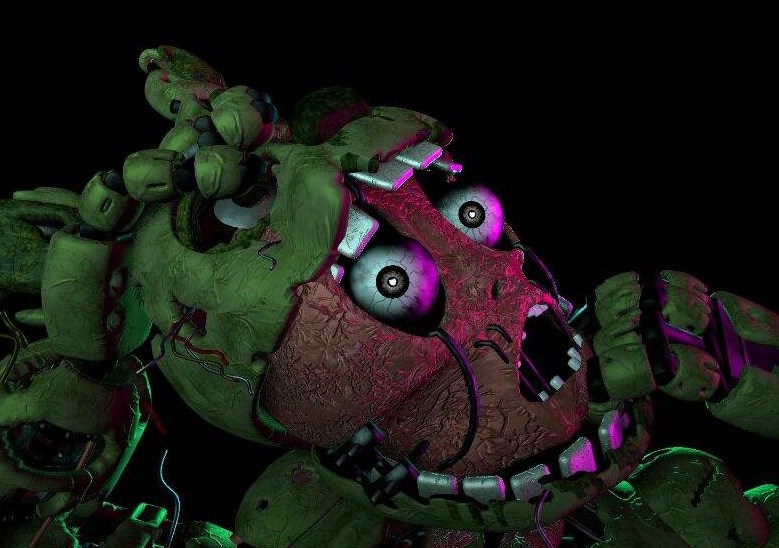 Springtrap is FNAF 3’s main villain, though we can also see him in Ultimate Custom Night.

Springtrap is in bad shape, with a torn mouth and significant damage all over his body. His body is yellow-green, and he has gray eyes. And if you look at him closely (Which I suggest you do from a screenshot or paused screen instead of in real-time), you can see William Afton’s remains inside him. He has five fingers instead of four you see in the other animatronics.

In FNAF 3, you have to keep your eyes on CAM 09, CAM 08, and CAM 07. He will appear in one of them and start approaching you through the hallways. You will have to use an Audio Lure to push Springtrap back or keep him where he is.

Blocking his path is your best shot if he comes through the vents. Fail to do that, and Springtrap will appear in your Office for a jump scare.

In FNAF 7: Ultimate Custom Night, Springtrap will start moving through the vents. Unfortunately, vent snares will not work on him, so you will wait until you see his face on the vent opening. When that happens, don’t waste time: close the vent promptly.

Plushtrap is a small animatronic plushie and Spring Bonnie’s plush toy version. He is green with darker accents and only has 3 toes and 4 fingers, while the other Nightmares have 4 toes and 5 fingers.

In the FNAF 4 minigame with the Crying Child, he is mentioned when a girl calls her plush trap Spring Bonnie. Then, we see him in “Fun with Plushtrap,” his first minigame. Here, he runs toward the player, and the only way to stop him is to shine a light on him. 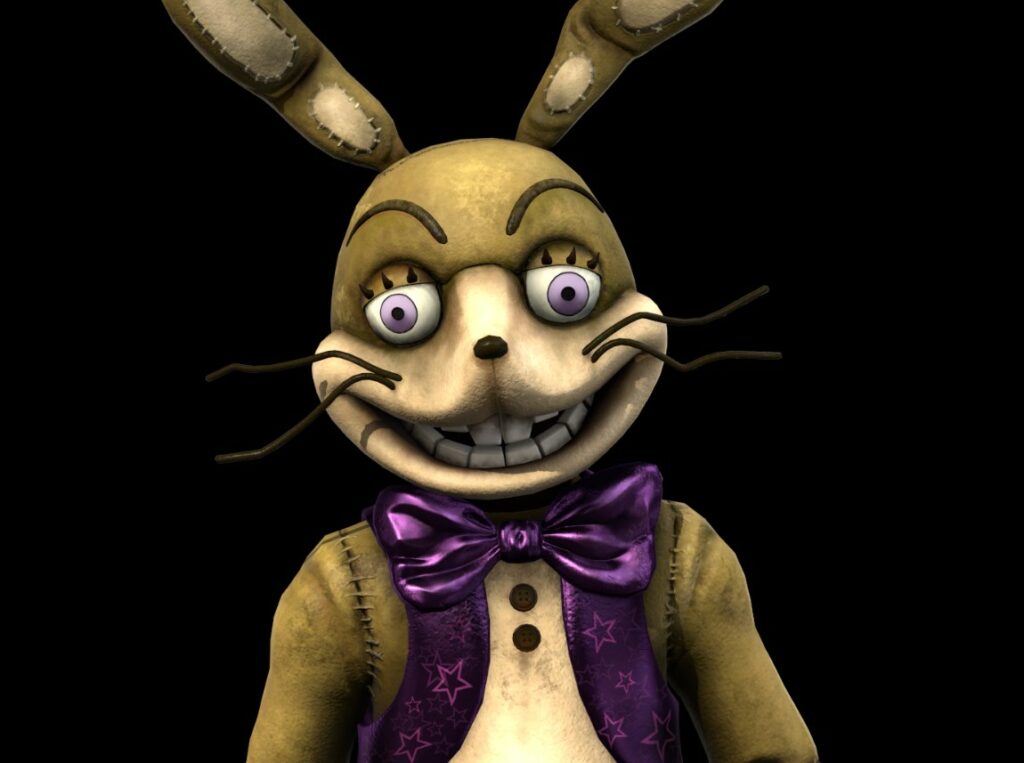 Glitchtrap is a virus that appears as a Spring Bonnie animatronic with William Afton inside. He is grinning, golden-yellow in color, and looks almost cartoonish. At first, he is translucent. However, he gains substance over time. His first appearance was in FNAF: Help Wanted, and he is the main villain in the Princess Quest minigame.

Scraptrap is similar to Springtrap. However, he has considerably more damage. There are numerous holes and patches in the suit, the left forearm is missing along with the right ear, and half his left ear is gone. In addition, there are several patches of exposed flesh beneath the suit, and we can even see bone in some places.

The Spring Bonnie suit is quite beaten up. The lower jaw is just a skull with the remains of burned flesh. Fur is missing from most of the suit, except for the chest, upper left leg, and left foot. 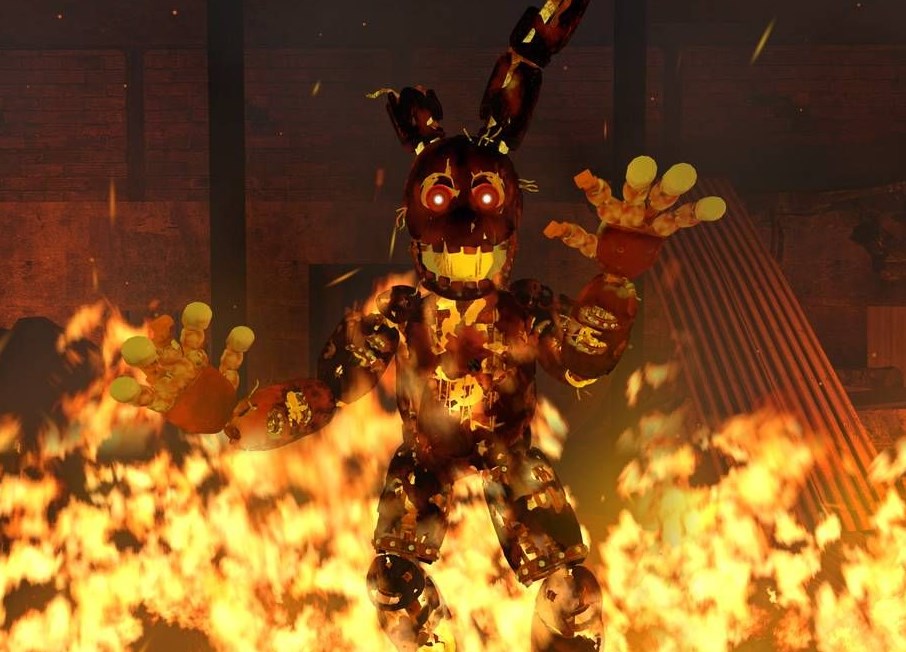 This is a heatwave animatronic skin. Flaming Springtrap is a darker orange than Springtrap. His insides also glow red-hot along with his hands. He is also on fire.

This is a wasteland-themed skin for Springtrap in Special Delivery. He is covered in warts, thick veins, spiraling eyes and is predominantly purple in color. This color could be reminiscent of William Afton as Purple Guy from the franchise’s minigames.

Question: What Is Spring Bonnie?

Answer: Spring Bonnie is one of the earliest animatronics in Five Nights at Freddy’s.

Question: Is Springtrap the same as Spring Bonnie?

Answer: Spring Bonnie is a springlock animatronic who performed with Freddy until the Bite of ‘83. Springtrap is a much older and weathered version of the suit, with William Afton’s body inside it.

Answer: Yes, and no. Yes, because Afton used to wear the Spring Bonnie suit to lure kids. It’s also the suit he died in. And no, because Spring Bonnie was a springlock suit, it often performed by itself; it didn’t need a human inside it to work.

Spring Bonnie is a character that players who don’t follow Five Nights at Freddy’s might not know a lot about. Unless you complete the minigames and follow the lore, it’s hard to know he existed.

However, Spring Bonnie is surprisingly central to the franchise’s lore for such a peripheral character. He was there when the Bite of ’83 happened, and his malfunction is what killed William Afton and turned him into Springtrap many years later.

It is worth revisiting the game just to learn more about this character.